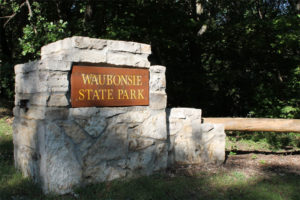 Out of state visitors at two western Iowa parks will have to keep paying an entrance fee for at least two and a half more years. Lake Manawa State Park in Council Bluffs had three million visitors last year and Representative Brent Siegrist of Council Bluffs said the fee may be a way to thin the crowds.

“Lake Manawa is the most heavily used park in the state park system, particularly because it’s next to Omaha and there are tons of Nebraskans that come over,” Seigrist said. “…Waubonsie State Park also is down near the Missouri border in Fremont County and they have a lot of traffic and visitors there.”

In 2019, the legislature authorized an entrance fee of $5 per out-of-state vehicle at both parks. It was a pilot project, to see if visitor traffic would change. “The COVID years dramatically affected those parks at that time,” Siegrist said, “so they didn’t have a particularly good read about whether this is something they wanted to extend into the future.”

This week Governor Reynolds approved the bill that keeps the fee in place until the end of 2025. Senator Dan Dawson of Council Bluffs said the fee can be a tool for keeping the peace in the park that’s just 10 miles from Omaha.

“When they have a crowd coming over to our parks to use it for purposes that you and I or anyone else here might not enjoy to take our families there and just enjoy the day — whether they want to drink or tear up the park or go off-road or so something like that, this is one more tool to try to maybe redirect some of our non-residents back to their state,” Dawson said.

There’s a daily fee for every vehicle entering a Nebraska state park. It’s $6 for Nebraskans and $8 for everyone else.

The State of Iowa began charging a $10 yearly park user fee in 1987, but it was repealed two years later. During debate of the continued entrance fees for Lake Manawa and Waubonsie State Parks this spring, legislators said they were not interested in imposing entrance fees at the other 81 state parks and recreation areas in Iowa.