You are here: Home / Crime / Courts / Both sides of abortion issue react to Supreme Court decision 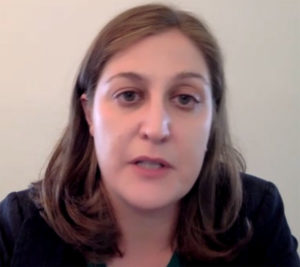 Representatives from the ACLU of Iowa and Planned Parenthood talked with reporters today to discuss the Supreme Court decision on abortion.

ACLU of Iowa legal director Rita Bettis Austen says the ruling that abortion is not a fundamental right under Iowa’s constitution is a “devastating reversal of prior precedent”. “It is not accurate to say that the Iowa Supreme Court threw out all constitutional protection for abortion today,” she says.

The ruling on the constitutional question came as the Supreme Court reviewed a lower court decision that said the 24-hour waiting period for abortion that was passed in 2020 was not legal. Austen says the ruling does impact abortion law review.

“What the court held that abortion is not a fundamental right, and that means that strict scrutiny, or the highest level of protection under our Constitution doesn’t apply to abortion rights under the court’s test that it uses to look at laws that restrict abortion,” she says. Bettis Austen says the lower standard of scrutiny known as the Undue Burden still holds.

“Which means that laws that place a significant or substantial obstacle in the path of a woman seeking an abortion are unconstitutional,” Bettis Austen says. She says that is the protection that is in place at the federal level for abortion law review.

Bettis Austen and a representative from Planned Parenthood cited an Iowa Poll that showed a majority of Iowans supported keeping abortion legal. Iowa Republicans, who have pushed to end abortion in the state have control of both Houses of the Iowa Legislature and the governor’s office. Those on the conference call could not say why Republicans have such control if a majority of Iowans support abortion.

“I wish we could answer it succinctly. But I think that’s beyond the scope of our press conference,” according to A-C-L-U of Iowa Communications Director Veronica Fowler. Bettis Austen says the next step in this case is for them to go back to the district court and continue the challenge that the 24-hour waiting period for an abortion is an undue burden.

Pro-life advocates welcomed the Supreme Court ruling on abortion. Kristie McGregor has spent every Wednesday outside the Sioux City Planned Parenthood clinic for the last two years praying. She says since her miscarriage in 2017, she’s devoted herself completely to fighting for a ban on abortion.

McGregor says she’s happy with today’s ruling – but she’s not celebrating yet. She says that won’t come until abortion is outlawed completely. “I think sometimes people get excited, and then they, then they give up the fervor in the fight. But we have a long road ahead of us. And we need to keep vigilant and keep pushing forward,” McGregor says.

She sees the court’s reversal as a step in the right direction. But until abortions in Iowa are banned, McGregor says she’ll keep showing up every Wednesday to pray.

(Kendall Crawford, of Iowa Public Radio contributed to this story.)