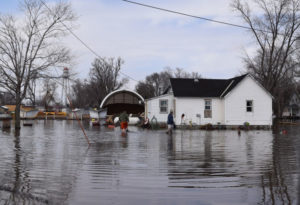 The northwest Iowa town of Hornick broke ground last night on a long-awaited berm project. It’s hoped the earthen structure will protect the community from future floods, like the one that devastated the town in 2019.

Hornick Mayor Scott Mitchell joined other community leaders in turning over dirt with shovels to launch the $2.1 million project.  “Congratulations, we’re starting a berm!” Mitchell shouted. It’s been three years since water from the Little Sioux River overtopped a levee and flooded the town. Since then, Mitchell has worked to make sure such a disaster isn’t repeated.

He says it’s a relief to know the town will soon have a new barrier of protection.  “When I get a text now from the National Weather Service about the creek going up, I don’t have to worry so much. To me, It’s amazing,” Mitchell says. “It’s kind of a life-changing thing for Hornick because what we happened in ‘19 will not happen again.”

Former Iowa Congressman Steve King attended the event and says he saw the community pull together in the wake of the disaster to protect the town. “It’s a well oiled machine of volunteers here that put out everything to save this town from the flood that they came in,” King says, “and put the solution in place to prevent it for the next time.” The berm should be complete by this fall to protect the town of about 250.

The project was made possible through an award of state flood recovery funds.