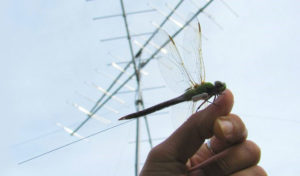 “The focus of this system is to track small animals with large movements,” Buckardt Thomas says. “So it focuses on birds and bats, dragonflies, they’ve also been put on monarch butterflies before, so the size of the animal will determine the size of the tag it can receive and how long that tag will be emitting a radio signal.”

Iowa now has seven of the receiving stations scattered statewide, with an eighth going online this fall, and plans to add four or five more. Trackers in Iowa have recently picked up signals from birds that are migrating from Jamaica and even as far away as Columbia.

“The system is integrated with basically any other researcher in the hemisphere,” Buckardt Thomas says. “There’s folks in Central and South America all the way up to Canada and we’re all operating on the same frequencies. So anyone could put a tag on a bird or bat or an insect, and if it moves through Iowa, it would be detected.”

As yet, the Iowa DNR isn’t tagging any flying creatures, but that’s something that’s being planned for the near future. For now, experts in Iowa tracking stations are keeping an eye — or an ear — on many thousands of creatures that have been tagged elsewhere. While we may already know a lot about the big picture of migration patterns, Buckardt Thomas says these stations will help us to understand even more about where various species winter and threats they may face.

Iowa’s seven tracking stations are located in areas that met elevation requirements and were placed on buildings owned or leased by the Iowa DNR. There’s one at Lewis and Clark State Park, with six more near the towns of Early, Boone, Swisher, McGregor, Wapello, and Burlington.

The state started installing the stations in August of 2021.