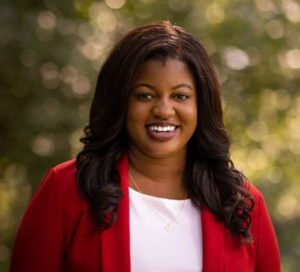 Deidre DeJear, the Democratic Party’s nominee for governor, is asking party activists to remember Iowa has a history of progressive politics.

“I’m here to remind you all that this race, these wins from the top of the ticket all the way up and down the ticket, are possible,” Dejear said this weekend at the Iowa Democratic Party’s state convention, where she formally accepted the party’s nomination to challenge Republican Governor Kim Reynolds in the General Election.

DeJear also announced Clinton County Auditor Eric Van Lancker is her running mate for the General Election, “We can be number one in education again, folks. We can be,” Dejear said. “…We can restore and enhance collective bargaining in this state. We can do that. We can ensure that every Iowan no matter where they live, no matter their zip code, no matter their race has equal access to the ballot box. We can do that.”

Van Lancker, who’s in the middle of his fourth term as Clinton County’s top election official, lost his bid for the Democratic Party’s nomination for secretary of state in the June 7th Primary. Van Lancker said he and DeJear will provide leadership on issues like voting rights as well as public education, housing, broadband and health care.

“It will not be about the issues that they use to try to divide us, distract us and deflect from the terrible outcomes of their terrible decisions that only help special interests and corporations,” Van Lancker said.

DeJear told Democrats the race ahead won’t be easy, but she said issues like abortion access and public schools can sway independent voters.

After her speech, DeJear told reporters Reynolds appears to be more focused on enhancing her national profile and that will be an issue in the race.