You are here: Home / Fires/Accidents/Disasters / Body of woman found after house fire in Sioux City 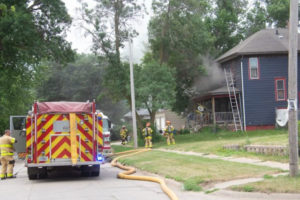 One person is dead after a house fire today in Sioux City.

Fire officials say the body of an adult female was found in the living room of the two-story structure on the city’s west side after investigators were able to safely enter the home. Firefighters found smoke coming from the roof of the dwelling when they arrived around 11:20 a.m.

The cause of the fire has not been determined at this time.