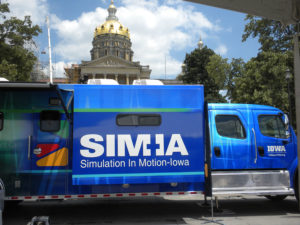 U-I program advisor, Cormac O’Sullivan says it allows medical professionals to get trained at home.
“We will drive all across the state of Iowa and provide high-fidelity simulated healthcare emergencies with any kind of provider that would like to participate, emergency medical response personnel, the EMTs and the paramedics, the local emergency room physicians, the nurses, anesthesia for surgery anywhere in the state of Iowa, we’re going to bring simulation-based education to you,” O’Sullivan says.

He cites one example where they would stage a car accident with mannequins for the local fire department. “They would come out to the scene, the four mannequins would be in the car, they would have to get the mannequins out of the car, just like they would do if it was a real emergency, put them on the stretchers, bring them into the back of the vehicle, which is set up just like an ambulance, take care of them as they would, and then the front half of the vehicle set up like your typical emergency room,” he explains.

They would then take them through training in the emergency room. O’Sullivan says there’s already staff shortages — and it’s tough for small towns to take everyone to a training session. “And if an emergency happens while you’re gone, there’s no one there to take care of the patients. So we’ll come to you,” he says. We’re also hoping to work with local community colleges and maybe high schools and get people interested in health care careers, we can show them how much fun it is, and what it’s all about helping save a life, and maybe more people will go in and we can get the facility staffed up the way they need to be.”

O’Sullivan is an associate professor in the College of Nursing where this first truck will be based in Iowa City. Two more trucks will be coming. “The second truck will be arriving in about three months. So we hope about September October, that’s gonna be in Sioux City, that one will go up and down I-29. And come in cover the western third of the state, the last truck will arrive we hope around November, December, that’s gonna be kept somewhere in Des Moines. We’re not exactly sure where yet, and it’ll go up and down I-35 and cover the middle third of the state,” he says.

The goal is to reach every single facility, provider, and county in the state at least once a year with some continuing education training with simulation. Sioux City EMT Trainer, Terry Regaller, was on hand for the announcement.

“Sioux City Fire Rescue is going to be housing one of the trucks there in Sioux City and we are going to be in partnership with the University of Iowa on days where they’re not utilizing the truck or possibly using that for some of our in-house training as well. We’re pretty excited about this,” Regaller says.

He says the training is very important to the success of first responders. “Oh, it’s huge. If you don’t have the training, then you aren’t going to have good results. And a lot of the small rural agencies they don’t even have training officers up to the speed where they should be,” Ragaller says. “So this is going to bring it to them. It’s going to up the game for the training. They’re gonna see mannequins and equipment they’ve never seen before. This is a huge game changer. ”

The start-up of the program is funded with an eight-million-dollar grant from the Helmsley Charitable Trust. Trustee Walter Panzirer, says Iowa is the fifth state to get these types of trucks. “We’ve done trucks in Nebraska, Montana, North Dakota and South Dakota. And now you’re in Iowa and then and the success rate, everybody’s been super happy with the trucks,” Panzirer says.

The funding will gradually drop down over four years, and then the University of Iowa has to find money to keep the program going.