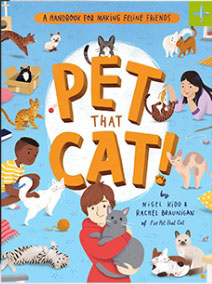 It’s said writers should write about what they know, and a Cedar Falls youngster who loves cats is releasing his first book, “Pet That Cat!”, based on his popular Instagram and Twitter accounts.

Twelve-year-old Nigel Kidd says it’s a how-to handbook for making feline friends. Kidd says cats are cuddly creatures, but you have to go about befriending them a certain way.

“I think that some people approach to abruptly and too fast,” Kidd says. “You want to approach slowly, let the cat come to you, let it sniff your hand. Oftentimes, people just go straight to the cat and start petting them, which the cat may not like because they haven’t gotten to know you.”

The book contains tips on how to care for cats, cats throughout history, a Cat Tracker so you can tally all of the tabbies you pet, and a quiz to find your feline personality. But back to petting cats. Once a cat makes it clear that it wants you to pet it, Kidd says there are specific areas you should target and others you should likely avoid so you don’t get scratched. 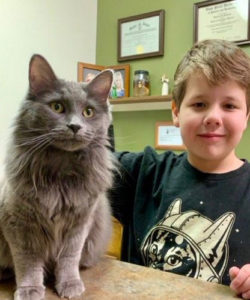 “The head and the back are usually the best areas. You don’t really want to pet the paws or the legs. They usually don’t really like that,” Kidd says. “Sometimes, it depends on the cat and its mood. Sometimes they’ll just want belly rubs, but other times, it’ll almost like a trap. They want to pounce on your hand, so you should usually be careful while petting a cat’s belly.”

Kidd’s two-years-older brother, Gideon, released his own book in 2020 called “Pet That Dog!”, though he insists there’s no sibling rivalry as to who’s sold the most. Kidd says his cat handbook is appropriate for everyone.

“It’s a book for all ages really and it’s not just for the little kids or the older kids,” he says. “I think it’s a good thing for basically all ages to read because it’s important for all ages to know more about cats, how to treat them, how to take care of them.”

The 128-page hardcover “Pet That Cat!” will be released July 12th through Quirk Books, based in Philadephia.