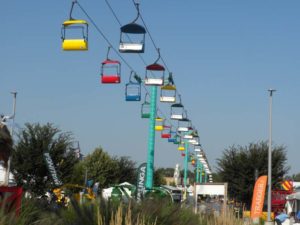 The Iowa State Fair is known for its unique sights and sounds during its summer run — but this year the iconic event is going to tone it down for part of a day.

State Fair spokesperson, Mindy Williamson, says they are planning their first ever “Sensory-Friendly” morning at the Fair. “And what that means is we’re sort of calming things down a bit, turning the lights down the sounds in our thrill park areas, we’re doing some smaller activities with not as many people opening a few of our buildings a little early,” Williamson says.

She says they are working with ChildServe, Drake University, and the AEA to create an environment designed with children and adults with autism or sensory processing disorders in mind. Our goal for the morning is to enable families who have a child or adult member with special needs to visit, explore and enjoy the Fair.

“People who are not used to crowds or don’t like crowds can have a little bit more time to enjoy things,” she says. “And we also have a calming room where if you get too much fair, then you can sort of have a place that you can go to.” They identified some other areas like the DNR courtyard where the event can be enjoyed in a quieter setting. Williamson says they don’t know how many people might take advantage of this day because there’s no way to track people who haven’t attended because of these concerns.

“We did put this out there on our social media and received thousands of shares from people. And the comments were really positive in the fact that maybe they haven’t been able to enjoy the fair before for various reasons,” according to Williamson. She says some of those who responded said they would feel more confident that they can come in and at least see a part of the Fair.

Williamson says the concept has been used in other states. “There have been a couple of other state fairs that have done similar activities — Ohio and Texas have had really good success with it — and we feel confident we’re working with partners who have the best expertise,” Williamson says.

This year’s Iowa State Fair opens up on August 11th, and the sensory-friendly morning will be Wednesday, August 17th. The Fair will run through August 21st.