You are here: Home / Sports / AJ Green signs with Milwaukee 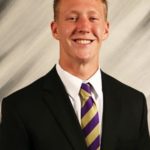 Former UNI star AJ Green has signed a contract with the Milwaukee Bucks.

Green’s two-way contract will allow the 6’5″ guard to spend time with both the Bucks, as well as the team’s NBA G-League affiliate, the Wisconsin Herd in Oshkosh. Green was not selected in Thursday night’s NBA Draft after deciding to forgo his final season in college.

The Cedar Falls native was a two-time Missouri Valley Conference Player of the Year and led the Panthers to Valley regular season titles in 2020 and 2022. He averaged just under 18 points in his Panther career.