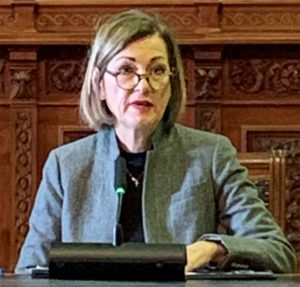 Iowa leaders in both parties are reacting to the U.S. Supreme Court’s ruling today on abortion.

Governor Kim Reynolds released the following statement today:
“The Supreme Court’s greatest moments have come when it allows America to embody more perfectly the enduring truth on which it was founded: that all human beings, without exception, are created equal. By that measure, today’s historic decision is clearly one such moment. But the fight for life is not over. As Governor, I won’t rest until every unborn Iowan is protected and respected.”

Iowa Democratic Party Chair Ross Wilburn released this statement:
“It is a dark day for freedom in our nation as we reckon with the consequences of a 50-years-long vendetta against the freedoms protected by Roe v. Wade. Iowa Democrats will continue to fight for every Iowan’s right to decide for themselves if, when, and with whom they want to have a family. And this decision has only strengthened our resolve to see these personal freedoms restored.
The majority of Iowans and Americans believe that abortion should be legal. Democrats in the U.S. House have voted multiple times to write the protections of Roe into law, but Republicans in the Senate block it every time. We must elect Iowa Democrats at every level of government in order to protect abortion rights. Kim Reynolds and Iowa Republicans will do everything in their power to outlaw abortion in our state. This fight is not over – and I’m proud to stand alongside the Iowans organizing for a future where our personal freedoms are protected.”

Republican U.S. Senator Joni Ernst’s statement:
“I’m proudly and adamantly pro-life. This decision reflects the science, will save lives, and rightly returns policymaking power back to the American people and their elected officials.”

Republican Congresswoman Ashley Hinson’s statement:
“This decision will save countless lives. In Congress, I will continue to champion pro-life policies and work to support expecting mothers and their babies.”

Republican U.S. Senator Chuck Grassley’s statement:
“Today’s decision recognized that the weak legal reasoning in Roe v. Wade has done more to provoke conflict than to resolve it, as the late Justice Ginsburg observed. In a meticulous and well-reasoned opinion, the court dispensed with a flawed precedent, as it has rightly done in landmark decisions throughout history. “For many Americans, including myself, this decision is about far more than correcting a flawed legal analysis in Roe; it means that the rights of the unborn are no longer in jeopardy by our federal government. Our nation was founded on the fundamental principle we are endowed by our creator with the unalienable right to life – a right that must be protected. “This ruling does not ban the practice of abortion but instead empowers the people, through their accountable elected representatives to make commonsense policy decisions. It takes policymaking out of the hands of unelected judges. “Regardless of your views on this issue, or any other issue for that matter, we all should respect the role of our impartial judiciary and the decisions that it renders. We’re blessed to live in a country where the people play a leading role in how we are governed. The people can advocate for policy priorities in the public square, the halls of Congress and at the ballot box, as so many pro-life Americans have done throughout the past five decades. Seeking to intimidate or attack the court or undermine its credibility because of an outcome that you don’t support is not the answer.”

Democrat Congresswoman Cindy Axne released this statement:
“Today is a tragic day for women and for all Americans. The Supreme Court decision to overturn Roe v. Wade is unconscionable, cruel, and takes the power away from tens of millions of American women to make their own medical decisions. I have seen firsthand how much progress women have made towards equal pay and equal rights in recent years. Because of the Roe decision, women just like me have been able to go to college, build careers, and plan their lives and families on their own terms. It will disproportionately affect the poor, minority communities, and anyone who can’t travel to another state or country to receive lifesaving medical care. This decision takes our country back decades and threatens every American’s right to privacy. Put simply, this decision is discriminatory, unfair, upends 50 years of precedent, and goes against the majority opinion of the American people.”

Democrat State Senator and U.S. Congressional Candidate Liz Mathis released this statement:
“Today is a very dark day for women across the United States of America. The Supreme Court’s ruling to overturn Roe v Wade takes away a Constitutional right for the first time in our country’s history and reverses 50 years of precedent for women to have a safe, legal abortion – women will die because of this extreme ruling. Rep. Ashley Hinson is currently backing legislation to criminalize all abortions and the doctors who perform them, even in cases of rape, incest, and when the life of the mother is at risk. In Congress, I’ll fight to restore the right to an abortion for Iowa women.”

Republican Iowa House Pat Grassley’s statement:
“Today, the Supreme Court restored a fundamental truth Iowa Republicans have always known – life is precious. These past two weeks have brought significant victories for the pro-life movement both nationally and in Iowa. Iowa House Republicans will continue to protect the innocent lives of unborn children.”

Iowa Senate Democratic Leader Zach Wahls released the following statement;
“Today’s disastrous Supreme Court decision by six unelected Republican Justices is a direct assault on the freedom of Iowa women to make their own health care decisions and of all Iowans to exercise their rights to privacy and self-determination. Here in Iowa, the right to an abortion is grave danger. Iowa Republican politicians have made it clear they want to completely ban abortion without exceptions as quickly as possible. Governor Reynolds, Senate President Jake Chapman, and other Republicans want to completely ban abortion without exceptions. Today we must renew our commitment to liberty and justice for all. Iowans must use the ballot box to vote for pro-choice Democrats at every level of government and protect access to abortion, contraception, and other medical services. As long as I serve in public office, I will not rest until today’s decision is reversed and abortion rights are permanently protected in Iowa and the United States.”