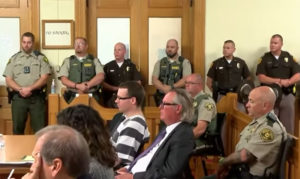 Michael Lang of Grundy Center was found guilty of first-degree murder, attempted murder, and assaulting a peace officer in the standoff in April 2021.

“The law requires in count one that you be sentenced to life in prison,” he says. The judge also sentenced him to 25 years for attempted murder and a five-year sentence for assault — with all sentences to run consecutively.

The sentencing came after victim impact statements from members of Smith’s family. Judge Dalrymple says his sentencing is based on what he heard from those statements, and also what he saw during the trial.”The terms evil malicious senseless have been uttered throughout, and it’s the court’s position and the court concurs with the other observations,” Dalrymple says.

He says Lang’s actions at his home during the standoff showed his malicious intent. “The fact that you not only shot in once with new shot him twice. You basically shot a lifeless man in the leg. You’re cold, evil comments that you made to the other officers that remained in your home,” Dalrymple says.

Lang has 30 days to appeal the sentence.

(KCRG TV contributed to this story.)