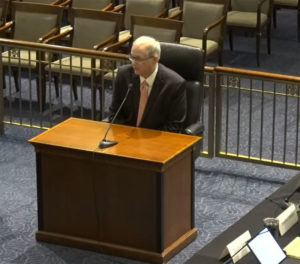 The state commission that selects candidates to nominate to the Iowa Supreme Court is hearing from five people today who have applied to fill an upcoming vacancy.

The first person to talk with commission members is Patrick Tott of Sioux City. He is the Third Judicial District Chief Justice and says that his other experience makes him a good choice for the Supreme Court.

“You have to be able to work with people get along with people negotiate in such a fashion that you don’t burn bridges with the people and be collegial with your other members of your court. If you’re not able to do that, your other colleagues aren’t gonna listen to you they’re going to ignore you will not be effective,” according to Tott.

Tott was asked whether he perceives a questioning or a loss of faith in the court system because of perceived politics. “Each side, depending upon who’s successful, who’s not successful. The other side is arguing that it’s all political,” he said. “And there’s a perception for that in a lot of different areas, and the process has become politicized. And so it’s very important for judges both track where levels or appellate court levels to understand that their role is not to be a lawmaker. Their role is to be an interpreter of the law.”

The others who are being interviewed are Ames attorney Timothy Gartin; Des Moines attorney. William Miller; First Judicial District Court Judge Alan Heavens, of Garnavillo, and Iowa Court of Appeals Judge David May of Polk City.

The Judicial Nominating Commission will meet later today (Monday) and select three of the five to forward to Governor Kim Reynolds. Reynolds then has 30 days to make her nomination to fill the position of Justice Brent Appel retires on July 13th.