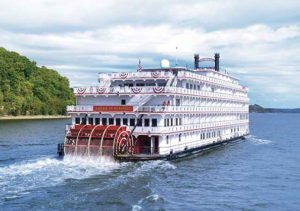 The American Heritage is one of the vessells that cruises the Mississippi River. (photo from American Cruise Lines.)

Iowa may not be at the top of the list of cruise ship destinations — but hundreds of people will be visiting on Mississippi River cruises this year.

Steve Ahrens is the executive officer of the Riverfront Improvement Commission in Davenport, which greets the passengers during stops. “They are all over I have so much fun interacting with them,” he says, “here they are having sort of that Mark Twain esque kind of experience plus right — and a little bit of that whole that Midwest, nice kind of hospitality that goes with it.”

The American Cruise Line has been traveling the Mississippi for 15 years, and its American Melody boat made its first stop along Davenport’s riverfront Sunday. The Viking Cruise Line is starting its first North American trips on the Mississippi River later this year. Ahrens says the cruises bring a wide variety of people to Iowa.

“They are from all over this country, and many times international guests are aboard as well,” according to Ahrens. “And we’re told especially that will be the case with Viking when they start up in early August.” Ahrens says the stops are not long — but there are many things for the passengers to do — including specially crafted exhibits and stops such as the museum or art center.

“They want unique experiences, that we sometimes that the folks that live here take for granted, many others enjoy these immensely. They also enjoy something else we take for granted. And that is the majestic views of the Mississippi River,” he says.

He says the size of the cruises varies — but the companies say they have great interest. “We go from like 170, I think, to 300. You know, as far as a number of passengers, and we’re told that they’re both in both cases, they’re already booking, you know, into through 2023 into 2024,” Ahrens says. Aherns says the cruises start from different ports of call, including Dubuque, Hannibal, and St. Louis, and can go up to St. Paul.