You are here: Home / Crime / Courts / Jodi Husientruit remembered 27 years after she disappeared 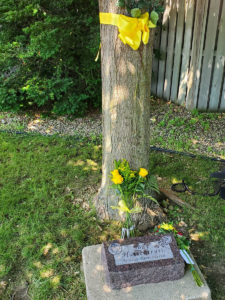 She was believed to have been abducted from the parking lot of her apartment complex early on the morning of June 27th, 1995. Her body has never been found, she was legally declared dead by a Cerro Gordo County district court judge in 2001, and the case remains unsolved.

A gathering of family and friends was held in front of KIMT late this morning. Current KIMT anchor Amy Fleming read from a written statement by Huisentruit’s family. “We know that along with us, you feel the pain and anguish over not having found our Jodi, and not having justice served in her face. Whoever thought on June 27th, 1995, we would still be searching for her 27 years later,” she says.

Huisentruit’s family thanked law those who continue their efforts to solve the case. “To law enforcement, we are grateful for the work you have done and continue to do in Jodi’s case, but we must continue to pursue all leads that come in and not dismiss any of them as insignificant. Please be willing to listen and accept help from others. We need all the assistance we can get in solving this case.”
Amy Kuns was the producer for the morning news program at KIMT in 1995 and was the last person to speak with Huisentruit, calling her on that morning since she was late for work.

Kuns says a lot of people still feel the impact of her disappearance 27 years later. “This isn’t just trauma to Jodi, there are a lot of victims in this story, first and foremost Jodi, Jodi’s friends, her co-workers, me because I was the last person to talk to her. There’s a lot of survivors’ guilt there, like ‘why did that happen to Jodi and why not to me?’. We may never know the answers to so many of our questions,” she says.

Kuns says she was recently talking to a relative who did not know about her connection to the Huisentruit case. Kuns says it’s situations like that where she wants to make sure Jodi’s story is kept alive until the case is solved. “I don’t know how old she is — 20-30-some years old — and she doesn’t know the full story, and that really struck me that now is the time for me to speak up, to keep the story alive, to keep Jodi’s memory alive, and to make sure that this doesn’t happen to anybody else,” Kun says.

If you possibly have any information regarding Huisentruit’s disappearance, you can call the Mason City Police Department at 641-421-3636.