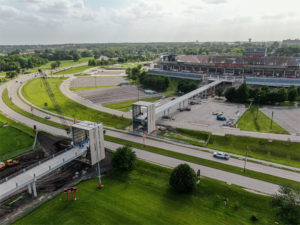 The bridge deck is ready to be installed. (ISU photo)

Work will begin tonight on the final portion of a long-awaited bridge that will benefit thousands of fans on football game days in Ames.

The East Gateway Bridge over University Boulevard allows fans to cross the roadway to Jack Trice Stadium from the parking areas east of the stadium. John Harvey with Iowa State University’s facilities management team, says fans from all around can use the bridge.

“There is a path that comes from the north side that will be an accessible route. That will come up along the northeast side of the stadium and then tie into the bridge where it meets the gate which will allow the bridge to be open year-round, even when the stadium is closed,” he says, “and will also give us another accessible entrance into the stadium.”

Harvey says they will close the roadway to traffic and install a steel truss over the roadway connecting two towers. They will then install the bridge deck. He says there are other panels that will go on the bridge as well and they plan to have it all done by the season opener.

“We have no options besides it has to be done,” Harvey says. The project costs ten-million-dollar dollars, and will also benefit motorists who won’t have to stop for pedestrians crossing the roadway.