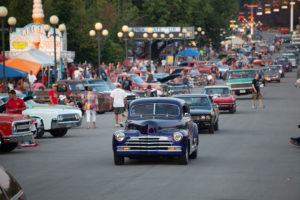 For Iowans who love glistening paint, shiny chrome and loud engines, one of the Midwest’s largest car shows will take over the Iowa State Fairgrounds this holiday weekend.

“We’re expecting over 5,000 cars to come from about 15 different states,” Schoennagel says. “This is one of our biggest shows that we put on throughout the year and right now we’re pacing to beat last year, and last year was a record-breaking year for us so we’re really excited to come back to Iowa State Fairgrounds.”

The event will feature custom hot rods, muscle cars, restored classics and trucks from way back in the 1920s up through 1997 — as 1997-model cars are now considered “classics”. “That is new for this year. It’s a way for us to open our gates to a new generation of vehicle and then hopefully a new generation of automotive enthusiast,” Schoennagel says. “It’s a 25-year rolling cut-off so that’s going continue to change. So next year, we’ll open our gates to 1998, but yeah, it is kind of hard and crazy to think that 25 years is considered classic.”

In addition to the thousands of stunning vehicles on display, other attractions include a remote-control car demo, the Central Iowa Railroad Club miniature train museum, and a “twilight cruise” down historic Grand Avenue.

The event runs Friday through Sunday.