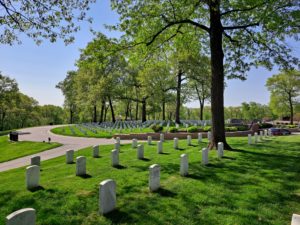 Iowa’s only national cemetery, created by President Lincoln during the Civil War, is said to be a beautiful, peaceful place, but the street leading to the manicured graveyard is a pot-holed moonscape.

Keokuk Mayor Kathie Mahoney is making an appeal for money to replace the eight blocks of road, sidewalks and infrastructure that leads from the town’s Main Street to the federal landmark.

“Basically what today is, more than anything, we are trying to create awareness,” Mayor Mahoney says. “We’re asking our government, we’re asking state, federal and our county government, too, and our local government, to help in this project.”

The $3.2-million dollar price tag is a small sum to pay, she says, to honor the six-thousand-plus veterans and their family members for whom it’s the final resting place.

“In that group of people is one U.S. Supreme Court justice, Samuel L. Miller,” Mahoney says. “There are 600 Civil War veterans buried in our cemetery. There are eight Confederate soldiers buried in the cemetery and there are 11 unknowns. And there are five Civil War generals buried there, too.”

During the Civil War, the federal government opened five military hospitals in Keokuk. The sick and wounded were transported to them by riverboats on the Mississippi.

The Keokuk National Cemetery is one of 12 original national cemeteries designated by Congress and it’s on the National Register of Historic Places. The white headstones are all uniform and in neat rows, as it was modeled after Arlington National Cemetery in Virginia.

“It’s an amazing place. I mean, it takes your breath away,” she says. “We have a ceremony every Memorial Day, Veterans Day, and if you have to speak, it brings you to tears to think about what those people, those soldiers, did for us and how they died for us and then here we are honoring them and the place is just beautiful — and the road is just crappy.”

That road is Keokuk’s South 18th Street, but in a ceremony today, it was renamed “The Road of Honor,” the first step toward renovation.