You are here: Home / Fires/Accidents/Disasters / Careless use of fireworks often to blame for house fires 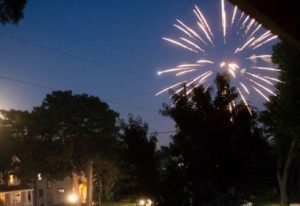 Large areas of Iowa remain abnormally dry or in moderate-to-severe drought, and Estherville Fire Chief Richard Beaver is urging Iowans to use extreme caution when it comes tonight’s fireworks shows in backyards and driveways.

“It’s still dangerous,” Beaver says. “The best thing I can say is if you’re going to light them, be very, very, very careful. Have a water hose handy and watch what’s going on.”

For Iowans who intend to shoot off some bottle rockets and anything bigger, Beaver’s advice is to do so in an open area where you can see where they land.

“If you can’t see where they’re coming down at, they can land in the grass and lay there and smoke for a long time and then all of a sudden, you’ve got a fire after you’ve went to bed,” Beaver says.

“Be cautious of disposal of them,” Hutchinson says. “That’s probably our biggest issue, putting hot fireworks into a garbage can and then the garbage can catches fire, which catches the garage on fire, the house on fire, that kind of thing.”

Sparklers are considered to be safer than things that shoot off and go boom, but Hutchinson says sparklers can be dangerous, too, because they get very hot and stay that way long after the sparkle goes away.

“A lot of times, we just tell people just make a pile, cool them off with some water,” he says, “and then after they’ve cooled off for a while, then you can throw them throw them in the trash can and be okay.”

According to the National Fire Protection Association, sparklers account for more than 25-percent of emergency room visits for fireworks injuries, as they can quickly ignite clothing and cause severe burns.