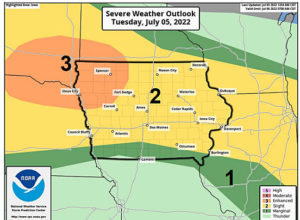 Most of the state is under a heat advisory today, while parts of eastern Iowa are under an excessive heat warning.

National Weather Service meteorologist, Kristy Carter, says those advisories last through tonight.
“We have a lot of warm, moist air coming from the south, helping with a boundary in place over northern Iowa, just kind of locking the connections in place,” Cart says. The high temperatures combined with the humidity created the concern for those going outdoors.

Carter says we haven’t had a lot of these days so far — but they do happen. “I mean it is July and in Iowa. So it’s not uncommon this time of year,” she says. While the heat is a danger — severe weather is also a concern  in the northwest corner of the state.

“Far northwest Iowa was in a moderate risk with a level four out of five for severe weather. The enhanced risk at the level three out of five expands across much of northern towards northwest into north-central Iowa,” according to Carter. “And then there’s a slight risk to two out of five for the rest of the state. And that’s mainly for wind threat, we are looking at the possibility for locally heavy rainfall.”

She says everyone should be prepared for the rough weather. “The Storm Prediction Center has much of northern Iowa in what they call a hatched area –that’s a 10 percent or greater probability of wind gusts 75 miles an hour or greater within 25 miles of a point,” Carter says. “There’s definitely a possibility for some like strong like damaging wind gusts across northern Iowa.”

Carter says temperatures should cool a bit on Wednesday with temperatures in the mid-80s, across northern Iowa to low 90s across southern Iowa.