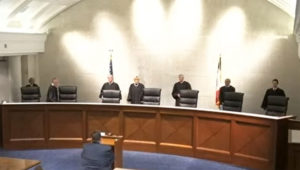 The Iowa Supreme Court has denied the governor’s request to rehear an abortion case it decided less than a month ago.

On June 17, the Iowa Supreme Court overturned a 2018 ruling that said women had a fundamental right to an abortion under the Iowa Constitution.

The U.S. Supreme Court overturned Roe v Wade the next week. Last Friday, Republican Governor Kim Reynolds asked the Iowa Supreme Court to rehear the case involving a 24-hour waiting period for abortions and adopt a new standard that would make it harder to find that abortion restrictions are unconstitutional.

The state court’s refusal to rehear that case means the 24-hour waiting period for abortions in Iowa is likely to go into effect late this week.

Planned Parenthood North Central States and the ACLU of Iowa said in a joint statement that the groups are “pleased the Court has declined the Governor’s radical proposal to immediately revisit its 24-hour decision and eliminate the right to safe and legal abortion in Iowa.”

Current Iowa law allows abortions up to the 20th week of a pregnancy.

Governor Reynolds is asking an Iowa District Court to reinstate a ban on most abortions after the sixth week of a pregnancy.