You are here: Home / News / Three northwest Iowa counties are in extreme drought 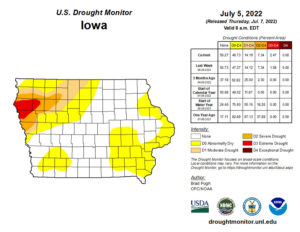 The latest U.S. Drought Monitor shows dry conditions persist and, in some cases, are worsening in parts of the state.

The weekly report shows most of Plymouth County and parts of Cherokee and Woodbury Counties are in extreme drought. Much of northwest Iowa is classified as in severe or moderate drought or abnormally dry.

The U.S. Drought Monitor is produced by the U.S.D.A., the National Drought Mitigation Center in Lincoln, Nebraska, and the federal agency that includes the National Weather Service.