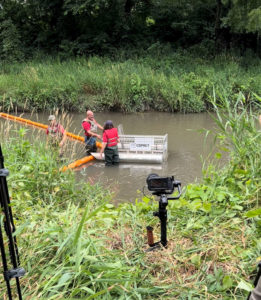 Davenport is one of three cities in North America selected to participate in the Marine Litter Pilot Project.

Robin Dunn with Davenport Public Works says it involves catching litter in area streams. “To see if we can’t glean some information about the sources of that litter,” Dunn says. She says they hope to use that information to shut off the source of the litter.

Dunn says the traps are fairly simple. “This particular device is basically anchored from either side of the creek with booms. And then at the end of those two booms that are kind of positioned in a V, there’s cage-like looking trap.” she explains. “So as litter is coming downstream, it hits those booms and the booms direct that litter, then to the trap.”

She says part of the project is to also bring public awareness of litter in streams and they chose a couple where the public can see the traps in action. Dunn says the systems are flexible. “If in two or three months we’re finding that we’re not getting a lot of data, or we’re not seeing the volume of debris that we thought we would see, we can actually move it further upstream further downstream, you know, again, in a compatible area, that’s conducive to having the trap there,” Dunn says.

Garbage can be carried into waterways by runoff, or it can be dropped there by people. Dunn says they should be able to make a determination when they examine the contents of the traps.

“You’ll know whether there was a rain event or not and kind of weigh that against the volume of material that was received,” according to Dunn. “More often than not, because it’s floatable material, you can kind of see what might have just been dropped in the water.”

Dunn says the traps will stay in the streams until late October or early November. “At that time, we will have about three months’ worth of data. The contractor is going to give us some information, you know, like how, how much does it take to maintain them, excuse me, how long were they, you know, basically looking at the effectiveness and the efficiency of them, at some point, we will have an opportunity to keep them,” she says.

Dunn says they hope to target the types of education and outreach needed after learning the sources of the litter. The other pilot projects are in cities in Mexico and Canada.