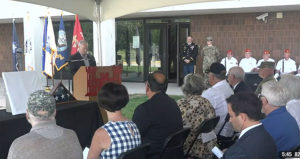 The United States Army Reserve Center in Dubuque was named Sunday in honor of a local soldier who died during Operation Desert Storm in 1991.

Ronald D. Rennison was assigned to the 14th Quartermaster Detachment after the Iraqi invasion of Kuwait. Rennison was one of 26 people killed in Saudi Arabia on February 25th, 1991 by a Scud missile. He had only been there six days.

Ronald’s brother Randy spoke with KCRG TV about the naming of the Reserve Center. “Oh, it’s a great honor knowing that, you know, the community comes together and wants to pay their respect to a fallen soldier,” Ronald Rennison said. Rennison had joined the U.S. Army in 1987. He served in South Korea as a motor transport operator including missions along the demilitarized zone. He was then assigned to the 82nd Airborne Division and completed missions in Honduras and Egypt.

Rennison’s awards include the Purple Heart, Army Achievement Medal, the Good Conduct Medal, Overseas Service Medal, and the Kuwait Liberation Medal from the Government of Saudi Arabia. His father and brother both also served in the U.S. Military.