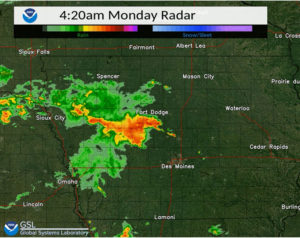 National Weather Service meteorologist Roger Vachalek says it’s still unclear if this powerful system, moving at speeds up to 55 miles an hour, constituted yet another derecho.  “We did have wind damage, as you mentioned, but it may not be strong enough to be classified as that,” Vachalek says. “We’ll have to take a look and see how how long the path length was later today, but as you did mentioned, some significant winds across the state and even in parts of Nebraska overnight as well.”

The strongest winds in the storm were reported in western Iowa’s Carroll County.  “We had a wind gust there of 79 miles per hour, three miles or so west-southwest of Glidden,” Vachalek says, “and also 70 mile per hour wind gusts in Monona County at Soldier, and then some mid to upper 60 gusts right to basically from Boone west over toward Carroll.”

Damage, mostly to trees, is also reported in communities including: Ames, Denison, Jefferson, Zearing, Grand Junction and Riverside. Last Tuesday, Iowa had its third derecho in three years, with winds that caused damage across parts of northern and eastern Iowa. It followed even-more-damaging derechos in August of 2020 and in December of 2021.