You are here: Home / News / Those on both sides of abortion issue hold rallies 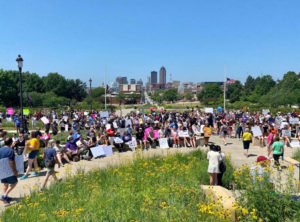 Thousands of demonstrators gathered outside the Iowa Capitol on Sunday afternoon to protest attempts to restrict abortion.

Among the speakers, Jean Swenson said her mother told her stories from before the Roe versus Wade decision, when Iowans had to travel to Chicago or New York to get abortions, or they would try to perform abortions themselves, which could be very risky.

Swenson said, “But we will never go back to those days because abortion rights are human rights.” Groups including Planned Parenthood and the Iowa Coalition for Collective Change hosted the event. It drew a huge crowd with many people holding signs and wearing shirts declaring their support for protecting the right to terminate a pregnancy.

On Saturday, a few dozen people gathered outside of a Roman Catholic cathedral in downtown Des Moines to pray, then they walked to the Statehouse to pray more. Tom Quiner is president of the board of Pulse Life Advocates, which co-hosted the event. He says his Catholic faith teaches that human life begins at conception.

“I believe that it is always unjust to kill an innocent person,” Quiner says, “so philosophically, theologically and politically, it’s just an issue that animates me.” Quiner says he’d like to see the ban on abortions after a “fetal heartbeat” is detected take effect. He also wants the Iowa Legislature to approve a constitutional amendment outlawing abortion, which would then go to voters to decide.

Abortion is still legal in Iowa up to 20 weeks of pregnancy.