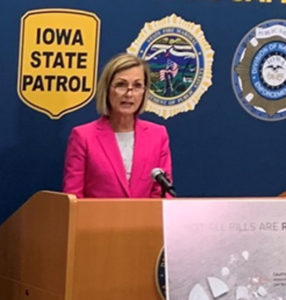 Governor Kim Reynolds held a news conference today to highlight a dramatic increase in fentanyl-laced fake opioid pills that have flooded the state.

It comes on the heels of the arrest of five residents of Cass County on federal indictments for conspiracy to distribute fentanyl in a ring discovered after overdose deaths in Cass and Shelby counties.
“Fentanyl is here and the threat is real. In our major metro areas, and in our small towns, no community is immune,” Reynolds says.

Deric and Kathy Kidd joined the governor and Deric told the story of how their son Sebastian overdosed. 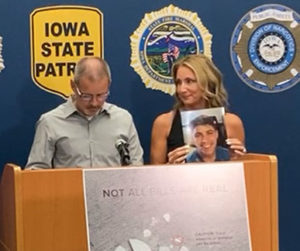 Deric and Kathy Kidd with a photo of Sebastian.

“On the evening of July 29, 2021, our son went to bed after a long day at work. He was leaving for a trip to Arizona the next day with his aunt and uncle. The following morning, I noticed his bedroom door was still closed, so I went in to check on him, and I found him slumped over his bed. It’s an image that will haunt me forever,” he says.

Kidd says Sebastion took half of what he thought was Percocet before he went to sleep and never woke up. “Our son was taken from us on July 30th, 2021, he did not overdose. He did not want to leave this world,” Kidd says. “You don’t overdose on one Percocet or Xanax. He was deceived to death by whoever sold him that counterfeit pill.” Kidd says his son was poisoned for lack of a better term.

He says everyone thinks they are going to be better parents than their parents were — and that kids are going to follow our rules. I’m sure almost everyone that has a teenager now has probably told them not to text and drive. And I’m willing to bet most of them have. Kids don’t listen,” he says. “Statistics show the majority of high school kids have tried vaping or alcohol. Many parents don’t even realize they’re doing this. These pills or other drugs are no different. We live in different times. These counterfeit pills are becoming more and more popular. They are easy to hide, easy to purchase, and are very seldom detected by parents.”

Kidd says young people are taking the pills for a multitude of reasons including physical or emotional trauma, depression, anxiety, physical pain from surgeries, peer pressure, or just experimentation. And he says it doesn’t matter what parents say.

“Please don’t look at someone that has lost a child and think that won’t happen to my kid. It does not discriminate. It doesn’t matter what demographic you’re from. It doesn’t matter who your parents are. Trust me when I tell you, you don’t want to feel this pain,” he says.

Public Safety Commissioner Steven Bayens says the volume of fentanyl seized by law enforcement throughout Iowa is shocking even to the most veteran narcotics agents. “To be frank, I’m surprised our overdose deaths aren’t higher. But that concern in the context in 2021, the DCI is criminalistics laboratory analyzed the 17,163 fentanyl pills described disguised excuse me as prescription drugs,” he says. “In the first six months of 2022, that number has quadrupled to 70,556 fentanyl pills.” A majority were disguised as prescription drugs.

Bayens says the Drug Enforcement Administration has determined that two milligrams of fentanyl can be lethal, depending on body size and tolerance  “We are truly at the point that anyone taking one of these pills is playing a deadly game of Russian roulette,” Bayens says.

Governor Reynolds says the state will do more to help educate everyone about the dangers of fentanyl and fake prescription drugs. She says the Biden Administration needs to do more to stop the flow of illegal immigration and drugs across the border.

“It’d be nice to have a partner in Washington D.C., that had enough wherewithal to stand up and take action. I mean, the terrorists that are coming across the border, the human trafficking that’s taking place, the individuals that died that were being smuggled across the border in the back of a semi truck, ” Reynolds says.Reynolds says the administration has done very little to address these issues.