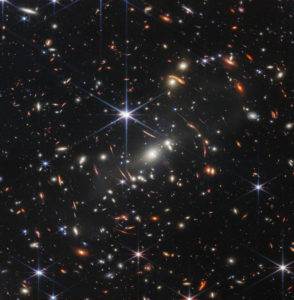 Stargazers around the globe are jubilant over the spectacular, first images being released from NASA’s new James Webb Space Telescope, including Professor Keri Hoadley, an expert on far-ultraviolet astrophysics at the University of Iowa.

“My first impression was, ‘Wow!,” Hoadley says. “The just sheer number of objects in this tiny patch of sky that JWST observed was phenomenal and I don’t think I’ve ever seen an image with so many objects in it before like this.”

The size of a tennis court, the ten-billion dollar Webb is the most powerful telescope ever launched into space. It replaces the Hubble Space Telescope, which is still functioning, but with 1980s-era technology.

Hoadley says, “Webb is giving us a whole new view of the universe in ways that something like Hubble cannot, but with the same kind of beautiful detail that we’re seeing with Hubble, and even more.” Named for the former NASA administrator who led the agency during the moonshot years of the 1960s, Webb will be able to essentially peer back billions of years in history into the most distant galaxies.

“That’s going to let us look further back in time than we’ve ever been able to do before,” Hoadley says, “to understand our origins, how the first stars formed, how the first galaxies formed and how we came to be today.” Just as exciting, she says Webb will allow researchers to study planets around other stars, gazing into their atmospheres as they search for signs of life.

Hoadley has submitted a proposal to use Webb in her own research, vying against hundreds of other space scientists for just a half-hour of time, perhaps in 2023. She wants to inspect a ring nebula which she believes collided with a star a few thousand years ago.