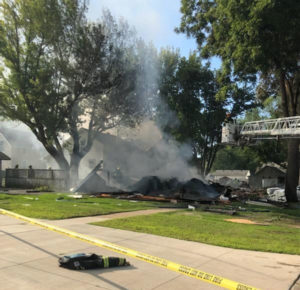 A home in Le Mars was destroyed by an explosion. (KLEM photo)

Three people were injured in a massive explosion in Le Mars today that destroyed one house and left a second heavily damaged by fire.

Fire Chief Dave Schipper says the explosion happened around 6:35 a.m. “It was called in actually by an Assistant Fire Chief who was on his way to station one and was just four blocks to the north of here when he witnessed the explosion and the debris landing in the street,” he says.

One of the victims was seriously injured. “All three of those were treated by Le Mar’s Fire Rescue and transported to or transported to Floyd Valley Hospital one two Mercy in Sioux City immediately and that person sent has been life-flighted to St Elizabeth’s Burn Center in Lincoln with some severe burn injuries,” Schipper says.

Schipper says the early investigation points to a possible gas leak as the cause of the explosion. He says the blast rattled several city buildings. “We have several structures around the area houses that have been damaged either windows or doors or things blown off the walls,” he says “Station one sits about five blocks from here — it actually had some things blown off the wall at the fire station.” 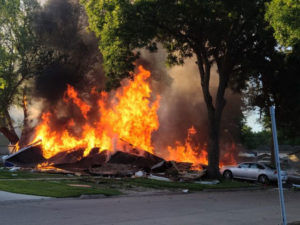 This home caught fire after the explosion. (KLEM photo)

The house closest to the explosion suffered the most damage. “We had a serious fire in the second structure we had structural integrity that was not safe for our firefighters to enter,” Schipper says. He says the second home was demolished because of the damage.

Both homes that were destroyed were rental properties owned by the same landlord. A third home caught fire — but the fire was quickly put out.