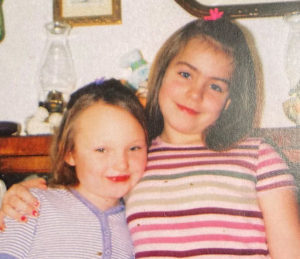 Collins and Cook-Morrissey. (photo from the Collins Foundation website.)

The ten-year anniversary of the disappearance of eight-year-old Elizabeth Collins and ten-year-old Lyric Cook-Morrissey is today.

Iowa Department of Public Safety Special Agent. Scott Reger says they continue to look at new and old tips on the case. “Our team meets regularly, it kind of ebbs and flows as far as how often — but we meet regularly doing both of those things, evaluating the old information and evaluating the new information,” Reger says.

The girl’s bodies were found in a Bremer County wildlife area five months after they disappeared — but no suspect has been found or charged in the case. He says the tips aren’t coming in as fast as they were early on — but they haven’t stopped either.

“The last 10 months we’ve received 117 tips into our email address that we have assigned specifically for this case. So that’s a good handle on the volume that comes in,” according to Reger. He says the conventional thinking has always been the longer a case goes without being solved — the hard it is to find the killer. But, one factor that has changed that a little bit is the development of new technologies.
“Technology is always advancing. And it’s advancing all over the board in terms of — think of a piece of evidence, anything you want to think about in terms of evidence — latent prints, video, cell phone, DNA, video enhancement, all of those things are always progressing technology wise,” he says.

Reger believes that technology improvement helps turn the tide back toward investigators. “Obviously, the sooner you can get on to somebody that may be responsible for something that’s always best practice, that always obviously is going to assist with leading to a successful resolution,” Reger says. “But I think the myth is, is that well, if you don’t do it in a certain amount of time, you know, I’ll use the 48 hours example. Because everybody puts that as the metric of if you don’t figure it out in 48 hours, it’s just gonna, you’ll never figure it out.”

He knows it may take a lot more time before the killer is found — but he is ready to wait that out. “We’re not going anywhere, we’re going to continue to hit this rock until it cracks. And so that continues to move us forward. The way that you feel as an investigator and anybody who’s worked this case feels the weight of wanting this to be resolved sooner rather than later,” Regar says.

The Cedar Valley Crime Stoppers is offering a 100-thousand dollar reward for information in the case. You can call them at: 855-300-8477 (TIPS). Tips can also be called into Evansdale police at (319) 232-6682, or through the Iowa Department of Public Safety email site: [email protected]