You are here: Home / News / Look for the moon to be big and bright tonight 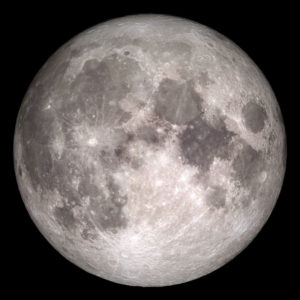 NASA photo of the moon.

Before hitting the hay tonight, Iowans should be sure to check out the July “supermoon,” what promises to be the biggest and brightest of the year.

Peter Geiger, editor of the Farmer’s Almanac, says tonight’s gem in the sky is known as the “Buck Moon.” Geiger says, “That’s because the velvety antlers of the male deer that start to sprout in the springtime, by the time we get to July, they’re pointed and they’re hardened.”

Geiger says the moon may appear to be a bit larger tonight as this is the month in which it’s closest to the earth.”In reality, whether it’s 2,000 miles closer or less isn’t going to make a difference in what you see,” he says, “but I think because your weather is going to be very good, you’re going to see a very bright, illuminated moon.”

Tonight’s “supermoon” is also known as the “Hay Moon” after the July hay harvest, and the “Thunder Moon” in correlation to this month’s typical storms. If clouds do block your view tonight, there will be another “supermoon” on August 11th, what’s known as the “Sturgeon Moon.”