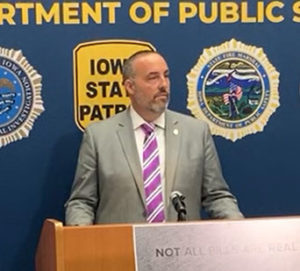 The state is ramping up public awareness efforts in response to an influx of fake prescription drugs laced with fentanyl that have shown up in the state.

Public Safety Commissioner, Steven Bayens says the pills are produced mainly in Mexico.
“The pill presses used by the cartels can create nearly flawless reproductions of common prescription drugs. As a result, even our own agents are now trained to treat every prescription pill they encounter, like it contains fentanyl,” Bayens says.

Bayens says the procedures for mixing what goes into the pills is not as sophisticated as the production process — and that leads to pills that are deadly. “The Drug Enforcement Administration has found that four out of every ten counterfeit pills submitted to their lab contains a lethal dose,” he says. “If we apply that data point to Iowa, more than 28,000 lethal doses of fentanyl had been seized. In the first six months alone.”

Bayens says the amount of fentanyl that is lethal can fit on the lead of a pencil. Too much fentanyl creates what is called a ‘hot batch.” He says you can help by reporting the discovery of the fake pills.

“The quicker we can identify a hot batch has made its way into a community. The quicker we can alert health officials, educate the public and begin enforcement action designed to stop its deadly effects,” according to Bayens.”We would also encourage citizens to call our narcotics tip hotline to report suspected drug activity. Every tip that comes into the hotline that is submitted to us by an anonymous email is distributed to one of our 17 field offices throughout the state.”

He says the pills are dangerous to handle, and you should not try to dispose of them yourself. Bayens says it’s also important for the lab to review the pills to try and determine their makeup. Anyone that finds a counterfeit pill is encouraged to call the Iowa Division of Narcotics Enforcement anonymous tip hotline at (800) 532-0052 or [email protected] and in the case of an emergency, call 911.

Bayens says the most common pills are designed to look like the powerful painkiller oxycontin.
“They’re smaller blue pills that are marked with M 30. And that’s actually the pharmaceutical markings for oxycontin. And so the vast majority of what we’re seeing right now and the vast majority of the seizures have appeared to be oxycontin. They’re stamped blue roughly the same size and have M 30 inscribed on them,” he says.

Governor Kim Reynolds says the state is planning to target young people to try and educate them more on the issue. “The Iowa Department of Health and Human Services will be deploying an extension of its public health multimedia campaign targeting preteens to young adults, which is currently focused on suicide prevention to include new messaging about the dangers of fentanyl,” Reynolds says.

The focus on fentanyl comes after overdose deaths in Cass and Shelby counties uncovered a fentanyl distribution ring in western Iowa and eastern Nebraska. For 24-hour confidential support and for more information on fentanyl and counterfeit pills, or for resources on opioid or other substance use disorders, visit www.YourLifeIowa.org.