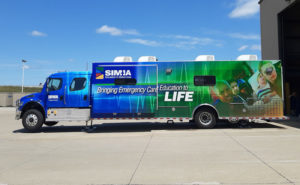 The second of three mobile medical simulation training trucks created for Iowa is now in service in Sioux City.

Sioux City Fire rescue training officer, Terry Ragaller, says they are putting it to use right away to train area first responders on trauma and medical conditions that may occur during RAGBRAI.
“Such as a bicycle crash, heat-related illnesses, maybe a car crash — things that we have a likelihood of seeing,” he says. “So this is a great opportunity for us to partner with them to do some high-intensity training and to do it at a level that we can offer in our area right now.”

The first truck was delivered in June to Iowa City and the U-I College of Nursing. The program is funded with an $8 million grant from the Helmsley Charitable Trust.

Brian Rechkemm is the program coordinator for the medical truck, and says they include three mannequins — an infant and an adult male and female — that are used to train in the treatment of all manner of injuries 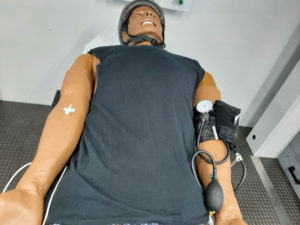 A mannequin from the truck. (KSCJ photo)

“Some of them may never even have seen a lair doll mannequin, but when they see it and the capabilities of it and what this bus can do — it’s going to be pretty amazing,” he says.

Rechkemm says they can provide a realistic look at any number of emergency situations.”We can set that and we can say hey you know this is what you need to do and we can run through those scenarios so that when they actually see it the first time in the field they’re not like ‘oh my god I’ve never seen anything like this before, they’re more accustomed to it and they’re like ‘oh yeah we did training on this,’ so we can go right through it,” Rechkemm says.