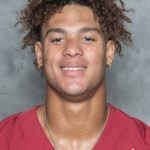 Iowa State senior wide receiver Xavier Hutchinson has been named to the Maxwell Award Watch List. The Maxwell Award is given annually to the outstanding player in college football.

Hutchinson, a Jacksonville, Florida, native, earned First Team All-Big 12 honors for the second-straight season in 2021. He broke the ISU single-season record and led the Big 12 Conference with 83 catches.

Hutchinson was 23rd nationally in receptions per game (6.4) and owns an active streak of 25-straight games with a reception. His best performance came against Oklahoma State with career highs in catches (12) and receiving yards (125).