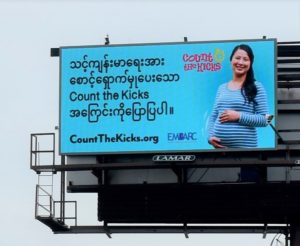 Two billboards are now along roadsides in Des Moines that are part of Iowa’s first-ever Burmese language campaign to prevent stillbirths.

The blue billboards feature a pregnant woman and all Burmese writing, except for the phrase “Count the Kicks.”

“We didn’t know because our Burmese family, our Burmese mothers, they didn’t know about how to count the kicks,” Tun says. “Now we know more about the story and that’s so exciting.”

The free, kick-counting mobile app “Count the Kicks” was launched in a Burmese language translation earlier this year.

Tun says about 10,000 people from the southeast Asian nation of Burma — what’s now called Myanmar  — moved to Iowa in recent years, primarily between 2007 and 2010. Many settled in communities like Perry, Marshalltown and Storm Lake, but most are in Des Moines.

Expectant mothers from Burma likely have never heard of this program, she says, and it could be a tremendous help.

“Before, they didn’t know this topic, this ‘Count the Kicks’ and later, they know it, they learned it and then they see the picture on the billboard,” Tun says. “It’s good for the community, for the moms.”

The partnership between EMBARC and Healthy Birth Day, Inc., sponsored Burmese billboards in Cedar Rapids and Waterloo earlier this summer. Tun says pregnant Burmese women in Iowa will have a difficult time getting health care if they can’t speak or read English very well.

While the vast majority of motorists in Des Moines won’t be able to read the billboards, Tun hopes they’ll at least be able to pick out “Count the Kicks” — and the website — and go there for more information.