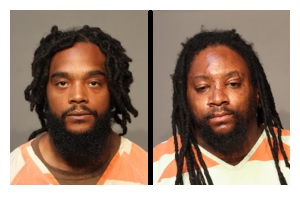 Burton and Ross (Photos from the Polk County Sheriff’s Dept.)

Two central Iowa men are now jailed after what police describe as a murder and robbery.

Des Moines police were called to an apartment Sunday morning and found the body of a man who officers said had “obvious traumatic injury,” and later said he’d been shot to death.

Within hours, two suspects were in custody. Dontaye Burton and Antonio Ross, both 33 and from Des Moines, are each charged with first-degree murder and robbery.

Police say Burton and Ross removed property from the crime scene, but police didn’t say what, though three firearms were recovered.