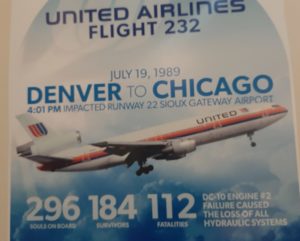 This week marks the 33rd anniversary of the crash of United Airlines Flight 232 at the Sioux Gateway Airport in Sioux City. An exhibit honoring the emergency response is on permanent display at the city’s Mid America Museum of Aviation and Transportation.

Museum director Larry Finley says visitors still come to learn about what happened that day when 184 of the 296 passengers and crew survived the fiery cartwheel crash down the runway and into a cornfield.

“It’s at least once a week when someone will walk through the front door and the first thing they will ask for is, ‘Is the 232 display open?’ and ‘How do I get to the 232 crash site?'” Finley says. “Anytime the museum’s open, the 232 display is open here in the museum, and also the crash site is right outside the museum here.” 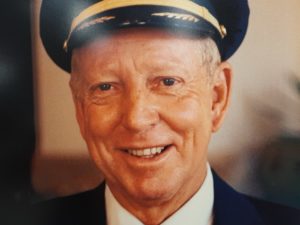 The pilot, Captain Al Haynes, radioed that the jetliner had lost all hydraulics and he could only make right midair turns with difficulty. Sioux City was the closest airport where he could attempt to land and that gave emergency rescue and fire units from Iowa, Nebraska and South Dakota a chance to get to the airport and wait for the plane.

Finley says, “Thirty-three years ago, a tri-state response to that crash, the medical community, the volunteers from throughout the area, the professional people from our own fire department, sheriff’s office, law enforcement people, fire-rescue showed up here — and it made a big difference as far as the number of lives that were saved.”

While it was a tremendous blessing to have such a broad and immediate emergency response, it also revealed a critical problem. 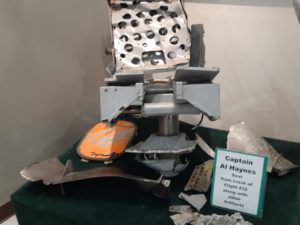 The captain’s chair and other wreckage.

Finley says since that day, crew members and many others with connections to the crash visit the museum, many during this time of the year.

“I have passengers and relatives of even some of those who lost their lives in the crash stopping in a regular basis,” Finley says. “They will actually travel by ground across the United States versus flying just so they can stop in Sioux City to visit the 232 display here in the museum, the crash site and also the memorial down on the riverfront.”

The museum is located near the airport at 2600 Expedition Court.