You are here: Home / News / Mobile museum to stop in each of Iowa’s counties by end of 2023 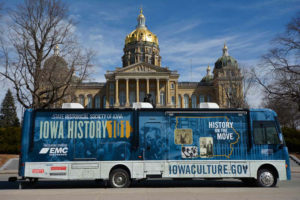 The State Historical Society’s mobile museum is touring several cities in Iowa this summer and currently is parked in Sibley. Michael Morain of the Iowa Department of Cultural Affairs says it brings artifacts to Iowans who can’t make the trip to the State Historical Museum in Des Moines.

“We really think it’s important to take artifacts out and about to Iowans,” Morain says. “After all, the collection belongs to all of us.”

The first tour for the agency’s mobile museum started in 2017. This second touring exhibit is focused on the people and places of Iowa.
It includes some artifacts from the earliest inhabitants of Iowa and one of the flight suits astronaut Peggy Whitson, a native of Beaconsfield, Iowa, wore in space. Morain says the team that put the exhibit together chose sturdy artifacts.

“We also made sure that they built some ingenious displays for them so that they could be secure and not rattle around,” Morain says. “We did some test drives over railroad tracks and things like that because many of these artifacts are valuable, maybe not monetarily, but for the state of Iowa they are priceless.”

One of the items on display is the pen Iowa Governor William Harding used in July of 1919 to sign Iowa’s ratification of the 19th Amendment which gave women the right to vote.

The mobile museum’s tour with its current collection hit the road this summer, with the goal of stopping in each of Iowa’s 99 counties by the end of 2023. It’s next stops are in Dyersville on August 11 and 12 and in Dubuque on August 20.