You are here: Home / News / Pocahontas preps for thousands of RAGBRAI participants 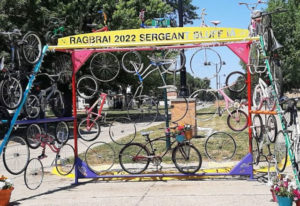 Thousands of people are leaving Ida Grove this morning, headed to Pocahontas in day two of the RAGBRAI — the Register’s Annual Great Bicycle Ride Across Iowa.

It’s the first time Pocahontas has been an overnight stop on the route and Pocahontas Mayor Jada Hallberg says it’s go time.

“All those details that, you know, seemed like a far out situation are now here,” Hallberg says. “We’re seeing them come together and so there’s a lot of excitement building in the community.”

Some cyclists start pedaling before sunrise to beat the heat and get to the day’s final destination. Entertainment on the main stage in Pocahontas will start at 2 p.m.

“If you’re familiar with Pocahontas, you know about the bohemian background. Staying with that we have a little bit different type of bohemian polka band called ‘Polka Tunes.’ They’ll start at 2 p.m. They’ll go to five,” Hallberg says. “We have ‘Hometown Native’ coming back to get us ready for the main act…’Pop Rocks’ at eight o’clock.”

Being a host community is a huge undertaking and Hallberg says it’s not just residents of the community who are stepping up.

“RAGBRAI officials told us, ‘Yes, you’ll need a lot, but don’t be surprised people will be stepping up at the last minute,’ and we are seeing that and we are very grateful to everybody who gives us a couple of hours of their time in any capacity to help,” Hallberg says. “Being a small community, I’d say that is one of our largest challenges, so we are maybe spread a little a thin, but also the good thing is outside people are coming in to help us, just not from Poky, but from our county and even relatives of people are coming in from out of town and out of state. They’re coming back to help.”

Sergeant Bluff, the kick-off point for this year’s RAGBRAI, is starting to get back to normal after thousands of visitors pedaled away Sunday. Erin Edlund, a member of Sergeant Bluff’s RAGBRAI Committee, says it was a picture perfect morning as residents lined the streets to cheer on the riders.

“We had a team of residents that showed up ready to work and get trash picked up and make sure that we had things mostly put away,” Edlund says. “Sergeant Bluff is mostly back to normal, which feels a little strange after all the build up to this.”

RAGBRAI’s route today covers just over 71 miles. Riders will pass through Galva, Schaller, Nemaha, Newell and Fonda before reaching Pocahontas. RAGBRAI will wrap up in Lansing on Saturday.