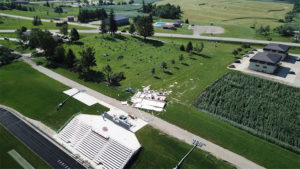 The South Winneshiek School District has buildings in Calmar and Ossian, and Superintendent Kris Einck says the sports facilities had the most damage.

“Our brand new press box is gone. Unfortunately, you know that’s just it is what it is we will rebuild it. There’s no doubt in my mind that it will be rebuilt but the scoreboard at the baseball field was pushed over again we can get that fixed,” he says. “Two of the football lights, track lights were pushed down. So we’ll have to get those fixed, and then our softball complex sustained some damage. We had our bleachers behind the home plate they’re thrown up over the backstop.”

The school buildings escaped the storm with no major issues. “The buildings are fine. The Elementary Middle School in Ossian really had very minimal damage and a little bit of water, nothing major. The high school same thing — we had some rooftop air conditioning units that got flipped over, we’ve had that happen before. We were without power for a while but you know what, those are things easy fixes,” he says.

Einck says they will begin meeting with insurance adjusters today.