You are here: Home / News / Bikers in for longest ride in decades today on way to Mason City 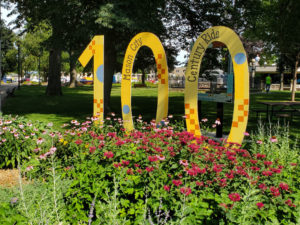 The thousands of bicyclists on RAGBRAI are heading for Mason City today on the longest leg of the ride in almost four decades.

Lindsey James, of Visit Mason City, says the trip from Emmetsburg to Mason City will be 105 miles, the first time a 100 plus mile stretch has been scheduled since Mason City first hosted an overnight stop in the mid-1980s.

“The day is dedicated to the late John Karras, RAGBRAI co-founder, and this is the longest mileage day on the RAGBRAI route this year, and the first ‘Century Day’ since 1985, so it’s a big, big deal,” James says, “and we’re looking forward to celebrating this awesome accomplishment with the riders.”

With the 100 mile ride, Mason City’s theme for the overnight stop is “Ride of the Century”. “The logo, designed by local artist Julie Kim, features muted earth tones inspired by Mason City’s famous prairie school architecture, and recognizable elements like the Historic Park Inn and downtown plaza light posts,” James says. “The wavy lines represent the Winnebago River, and the straight lines show progress and movement. The banners represent the finish line and the feeling of jubilation that comes along with a job well done.”

Several large “100” signs have been placed throughout Mason City in commemoration of the 100 mile ride into town.