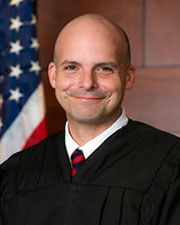 Governor Kim Reynolds today named Iowa Court of Appeals Judge David May of Polk city to fill the vacancy on the Iowa Supreme Court left by the retirement of Justice Brent Appel.

Judge May was one of three candidates sent to the governor from the State Judicial Nominating Commission.
“At every point in this decision, Judge May of the Iowa Court of Appeals stood out for his experience, his approach to interpretation and his commitment to judicial restraint,” Reynolds says.

May has been on the Court of Appeals since 2019 after being elevated from his district court position. May says he intends to decide cases based on the law as written and with what’s consistent with the U.S. and Iowa constitutions.
“The basic principles of judging remain the same. Judges don’t exercise the powers of the executive and the legislature. We have a different job. Our job is to decide legal disputes,” May says.

May was a finalist for a previous Supreme Court vacancy in 2020.