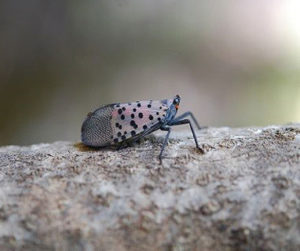 An invasive bug that could threaten many of Iowa’s fruit crops and trees has been found in the state — but a top Iowa insect expert says there aren’t enough of them at this time to pose an immediate threat to Iowa’s agriculture.

State entomologist Robin Pruisner says a person found the first spotted lanternfly on a maple tree in Dallas County and the second a week later in the same area. Both were immature – black with white spots.

“We do not call what we’ve found so far in Dallas County and infestation,” she says. “it appears that we’ve got hitchhikers — not a reproducing population at this time.” The spotted lanternfly can jump from plant to plant and feed on sap. It leaves behind a sticky substance that can develop a sooty mold which blocks photosynthesis and can kill the plant.

Pruisner  says she’s disappointed the bug has been found here. ” The closest known infestations of spotted lanternfly are in the Indiana-Ohio area, so I didn’t expect them to make such a large jump into Iowa,'” she says. Spotted lanternflies can attach their egg masses on vehicles or firewood and hitch a ride for a long distance.

Pruisner is encouraging people to send photos to the Ag Department if they think they’ve seen the insect.