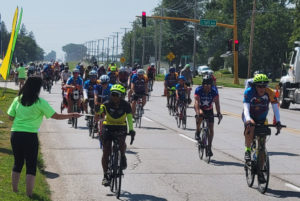 Nearly 20,000 riders completed “The Ride of the Century” on Wednesday as the overnight stop for the 49th edition of the Des Moines Register’s Annual Great Bicycle Ride Across Iowa was in Mason City.

Riders trekked 105 miles from Emmetsburg on Wednesday, the first 100-mile leg of RAGBRAI since 1985. Steve Luper from Seattle, Washington is enjoying his first RAGBRAI experience.

“The cycling has been fun. We’ve been incredibly fortunate with the weather. Saturday night when we got into Sergeant Bluff it was kind of hot and we were thinking that was going to be the weather for the week, and it’s been pretty comfortable,” Luper says. “Today’s the sunniest day we’ve had but not ridiculously hot. I’ve been enjoying Iowa corn and pie and beer. I think those are the key things for RAGBRAI.”

Colleen Nagengast of Naples, Florida says despite the 100-mile-plus ride, it wasn’t that bad, as the previous day brought a headwind. Nagengast says she’s been enjoying her first trip through Iowa on a bike. “I can understand why people have done it, I absolutely enjoyed it. The best experience I’ve done,” Nagengast says. “I’ve done other states’ tours and Iowa is the best – the camaraderie and the town’s support.”

Tonia Richter from Fox Lake, Illinois says she originally wasn’t going to do the 105-mile ride from Emmetsburg to Mason City but is glad she did. Richter says she’s been pleased with her first RAGBRAI journey. “I think the people are the fun part, right? Everybody talks to everybody, and everybody is very kind. I love that,” Richter says, “and the towns are very welcoming to us here.”

Michele Randall of Rochester, New York and her husband are on their sixth RAGBRAI ride and it’s been the second time they’ve been in Mason City. Randall says she enjoyed the ride alongside Richter. She says, “With the tailwind, and it was flat, we didn’t stop as much in the beginning because we thought it might get really hot, who knows about headwind-tailwind, and it was great. We stopped at the beer tent and did two and sat in the shade, took our shoes and socks off, had a beer, it was just delightful.” Richter added, “It was amazing. A nice way to end the ride today.”)

Riders have a shorter ride today as it’s only 48 miles from Mason City to Charles City. From there RAGBRAI stops in West Union on Friday night and wraps up in Lansing on Saturday.