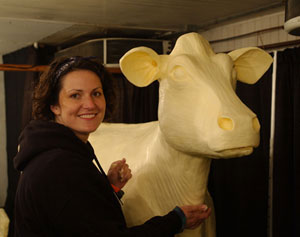 “The Music Man” will be celebrated at the Iowa State Fair this year with a butter sculpture to go along with the fair’s famous butter cow.

Butter sculptor Sarah Pratt says she took a tip from the fair’s original butter sculptor and started keeping a list of ideas for future sculptures, and the musical she enjoyed while growing up was on the top of the list.  “About five years ago, I decided it was important to start a list,” Pratt says. “Norma Lyon always had a list of things she wanted to sculpt some day at the Iowa State Fair, and so I just went searching for famous Iowans, and on the top of the list was Meredith Willson, of course. I grew up absolutely loving the 1962 Music Man movie and knew all the songs, and so that was an obvious choice to go on the list.”

Pratt says while she won’t be able to get all of The Music Man’s “76 Trombones” into the sculpture, there will be at least one trombone and a number of other musicians. She says not everything is set yet on what the final sculpture will look like.
“I am still determining the exact final position of some of the characters,” she says. “In my plans to finalize the sculpture, I’m in the cooler this week, even working on it now, and so the band components are pretty up and going, as I’m getting done with those, but I’m still determining how Harold Hill and Marian will be depicted.”

Pratt is taking a couple of field trips before the State Fair starts to get her Music Man mojo going and finalize her plans for Harold Hill and Marian the Librarian. “This weekend, I’m going to be heading to Mason City to visit the museum and take the tour of Meredith Willson’s home,” Pratt says. “Then next week, my sister and I are surprising my twin daughters and we’re going to visit New York and see the Broadway musical. Very last minute, just to try to hone down the essence of that component, their relationship is so complex.”

Pratt says she’s been wanting to do a Music Man sculpture for five years and has been reading up on Mason City native Meredith Willson leading up to this year’s fair. “As it moves and changes in my mind, sketching, watching the different movie renditions, and then I did read Meredith Willson’s book ‘But He Doesn’t Know the Territory’. That was really fun and enlightening on what he put into it, especially in light of his growing up in Mason City, and his family members,” she says. “I really want to make sure it’s not just a nod to the musical but also to his life and what he put into that production, and how it ties into his experience living in Iowa.”

“The Music Man” movie premiered in Mason City 60 years ago last month, while a Broadway reboot of the musical opened on February 10th of this year. The Iowa State Fair starts its 11-day run on August 11th.