Saturday is “World Day Against Human Trafficking” and one of the efforts in Iowa to raise awareness involved training the drivers of the big rigs to spot trafficking.

“Back in 2013, we began this awareness campaign with a group called “Truckers Against Trafficking,” and their goal is to train all truck drivers what human trafficking looked like, just with the idea that they’re out there on the highway system more than anyone, and I see more than anyone saying make those reports,” Nickell says.

He says truckers are a great resource for information on what’s happening on the highway. “They are the eyes and ears on the road, and they definitely know what’s out there. And law enforcement, we look for the abnormal — we know what the normal looks like — so we’re looking for the abnormal and that’s the way they educated them to look for something that just looks different,” he says. 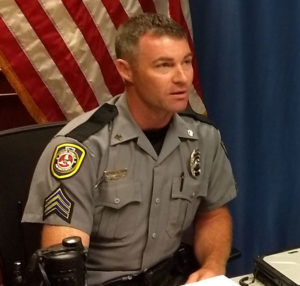 Nickell says the drivers and industry have been very receptive of their “Truckers Against Trafficking,” or TAT training.

“These these folks are highly motivated to make the reports, there’s just certain certain crimes I think we can all get behind. And this is one that they’re excited to be that everyday hero, it’s called and make that phone call,” according to Nickell. “So since since we started, TAT, 1.3 million have been have been TAT trained going through their certification process. And we have facilitated more than 40,000 truck drivers here in Iowa in the training.”

Nickell and others says it’s important for everyone to learn the signs of human trafficking, because it can happen to anyone of any age. You can go to the Department of Public Safety website to find out more .

You are also asked to give them a tip if you see something that doesn’t look right. You can call toll free at: 888-373-7888 to give a tip. Or you can go to the DPS website: stophtiowa.org to make a report, or find out more about training.