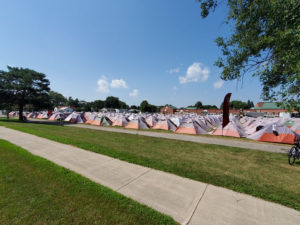 West Union is preparing to be today’s final overnight stop on RAGBRAI — the Register’s Annual Bicycle Ride Across Iowa. Matt Marsula of Main Street West Union says the community has been preparing for the past six months.

“There are going to be an extra 20,000 people in West Union…We’re a town of 2500, so our downtown is going to be fairly congested,” he says. “That’s where all of our events are. That’s where we expect everybody to spend the majority of their day.”

The town’s goal was to offer unique experiences to riders.

“One thing I’m excited for is our Human Foosball. It is just a fantastic game where people play a human-sized version foosball and that always seems to draw a massive crowd. We’ve done it at kid-focused events and the adults end up taking over completely, so we really think that will take off,” he says.

Fifteen vendors will be set up in West Union’s downtown to provide food and activities. Concerts will start at 10 a.m.

“Business owners, citizens, myself — we’ve all been on the same page,” Marsula says. “RAGBRAI, the value there, isn’t in the day that they come, but individuals that come back.”

Riders making their way into town have to make a bit of a climb on today’s route, so West Union has adopted a motto: it’s all downhill from here. Riders will leave West Union Saturday and end the RAGBRAI route in Lansing.

“We hope that they stock up on many of the loal restaurants we have and many of the food vendors,” Marsula says. “…You might as well go all out on the last night.”

RAGBRAI riders and their support staff will be camping at the county fairgrounds and the airport, plus parking lots at both schools in West Union and the community’s recreation center are set up to welcome visitors. For those who aren’t part of the RAGBRAI contingent, Marsula says residential streets will be fairly open for vehicle parking.