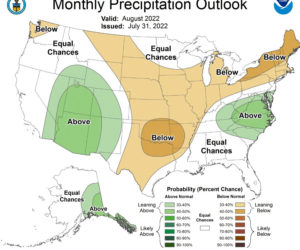 Much of Iowa’s expected to roast in this week’s heat wave — which may end up lasting much longer — and it follows a very steamy July.

State climatologist Justin Glisan says the just-ended month was one-degree warmer than normal statewide and we had one-inch less of rainfall than the average. Glisan says Iowa’s farmers are especially concerned about forecast models that show more of the same during August.

“We’re getting into the teeth of the growing season but also the warmest part of the year for Iowa late July and August,” Glisan says, “and we’re definitely going to turn on the furnace this week.”

The Climate Prediction Center is releasing its maps for expected temperatures and precipitation during August — and both show the hot, dry trend will continue for Iowa during the month ahead.

“It doesn’t bode well for the drought conditions that we’re seeing, especially in northwestern Iowa where we have D1 to D3 drought, the extreme drought category,” Glisan says. “We would like to see timely rainfall to hold the crop on, but right now, the probabilities, they’re not working in our direction.”

If there’s a bright spot to the past month, Glisan notes there was no severe weather anywhere in Iowa during July.
“We don’t have severe weather, we don’t have thunderstorms, we don’t get rainfall and hence, drought conditions expand,” Glisan says. “We saw similar behavior last year at this time. Drought was more pervasive last year, D1 to D2 across much of the northern two thirds of the state.”

While we’re in the third year of a La Nina pattern, Glisan says it’s still too early to say if the warmer, drier weather will last into the fall months.