You are here: Home / News / Workers at Ingredion in Cedar Rapids go on strike 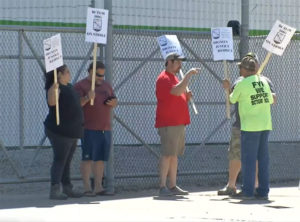 The 127 employees of a grain processing plant in Cedar Rapids are now on strike. Ingredion Incorporated has been in negotiations since June with its union on a four-year contract.

The existing contract ended Monday morning and union members voted to strike. The local union president was on the picket line and says they’re prepared to go as long as it takes to get a contract his members can agree to.

The workers are part of the Bakery, Confectionary, Tabaco Workers and Grain Millers International Union. Mitch Kacena has been at the plant for three and a half years. He said the company’s current offer would cut his pay from $28 an hour to $26. That’s a drop of several thousand dollars each year. It’s his first strike.

“I’ve never really been around before either. It’s kind of a whole new thing for me,” he says. A spokesperson at Ingredion’s corporate office in Westchester, Illinois said there may be temporary facility stoppages, but the company plans to continue operating the facility and fulfill orders.