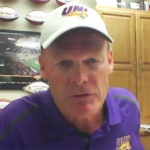 Northern Iowa has been picked to finish fifth in the Missouri Valley Football Conference preseason poll. The Panthers finished 6-6 last season which ended with a loss at Eastern Washington in the FCS playoffs. They open September third at Air Force.

“There is a lot to do and a short amount of time to do it”, said UNI coach Mark Farley. “I want to maximize our time but ultimately you want to play with the spirit that you need to play the game to be great at it.”

Farley says junior Theo Day and sophomore Matt Morrissey will compete for the job of starting quarterback. Day played in 11 games last season after transferring from Michigan State and passed for more than 23 hundred yards and 16 touchdowns.

“We will take a good solid two weeks to install and make sure everybody gets the knowledge they need to show the talent they have.”